This should be worth checking out. The Arena Stage Blog has listed a live-stream round table discussion about solo writer/performers on Jan. 2nd. Includes Mike Daisey, Anna Deveare Smith, Sarah Jones and Lisa Kron (moderated by the delightful Gary Garrison). Sponsored by the Dramatists Guild Academy.

Let me be very forward with this: I heart Yoshi Oida.

He is primarily known for his over 40-year collaboration with legendary British director Peter Brook, the 'magician of European theatre' and in recent years for being one of the most sought-after opera directors worldwide, Oida has graced stages world-wide with his solo masterpiece Interrogations. 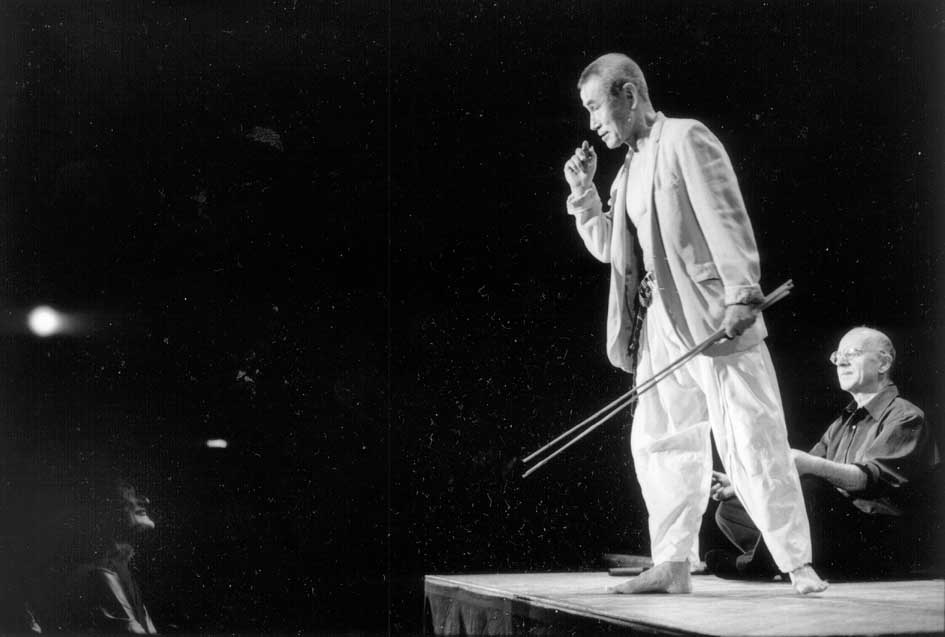 The comical play depicts a test that a Zen master gives to his student, lasting several days, with the goal to determine if the student has reached enlightenment. The test consists of a series of questions framed in koans, or riddles, that the student must answer correctly in order to "graduate." Since its premiere in 1979 at the Avignon Festival, this one-man play with live musical accompaniment has been hailed as Oida's masterwork.

Oida has said of the play, "During the performance of Interrogations, I ask the audience questions from the koans. In this case, there is no spiritual or philosophical objective, only an entertainment based on the gap between word and thought. As in the writings of Beckett or Ionesco. Obviously, there is no need for anyone to find the 'right' answer, but the questions act as a thread linking the audience with the two performers. Together we move towards a moment of shared delight, towards a living theater."

I have never seen Interrogations, but have witnessed Oida in a series of Beckett plays called Fragments directed by Mr. Brook. What stuck me about Oida as a performer was his professionalism (it was obvious in the performance he was very at home on the stage) and his sense of humor. His books Invisible Actor and An Actor Adrift are both delights, filled with useful items.

What strikes me in the video below and having seen Mr. Oida in performance is how physical he is. Now in his late 70s he is still as fit and agile as actors a third of his age.

Read a PDF of  "20 Questions with Yoshi Oida" from American Theatre Magazine here.

Also, here's a good write up on this dynamic solo performer.