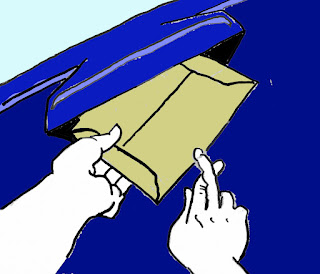 A young performer approached me after a recent solo improv workshop I was leading. The young lady did not want to know about improv theory. She did not have questions about performance techniques. She did have a slew of questions about practical matters. She wanted to know about the concrete things folks in the performing arts deal with that a young performer seldom gets a chance to learn through workshops or classes. She wanted to know about websites and merchandising and securing venues. She wanted to know about the stuff I’ve learned “the hard way” which is to say, through years of trial and error. And I was happy to chat with her about that kind of stuff. One of her questions really stuck with me, and it is exactly the sort of thing this blog was built to address: What is the best or strongest way to submit your work to a festival or a venue?

Personally, I have found that there are a few things have proven to be wonderfully beneficial in getting my solo work out there. Chiefly, my first step is to make sure I have a really strong, worthwhile show. This sounds so simple, but I sometimes work on stuff that would find better expression in, say, a multi-character piece, or as spoken word at an open mic, or in a sketch comedy revue and so on. I have to feel really good about putting my name on the show as a solo work, first and foremost.
Hand in hand with the belief that my show is of high enough quality that it is actually ready to show to audiences (as well as critics and colleagues), I spend a lot of time really getting to know my show. How do I explain it to people? How do I market it as well as me performing it? This, of course, is a process. You will naturally find more and more in your own show the more you perform it.
When I was putting together CHOP and for the first several productions, at about three different festivals, I was leaning hard on a particular approach. I had understood my piece to be mostly about a protagonist that deals with finding his identity through unusual circumstances. And it is about that. But some feedback from my tech crew allowed me to see what they saw in the piece as well. They saw a romance. A love story between the protagonist and the woman who acts as a sort of catalyst for his transformation. Oh, I thought, yeah. My show also has a love story.
This changed both how I approached the show as an actor, but also in how I marketed the piece.
I think marketing tools are important. When submitting a piece you have to remember the people selecting and adjudicating for festivals have not seen your show yet. They are looking for a hint of what it is all about. Not just the content, but the vibe, too. And of course, without experiencing the show, marketing tools are the only gateway they have into the piece.
I like having a good promotional/clips video. I take the clips directly from actual show recordings. I want the selector to hear the audience response as much as my performance. I sprinkle these promos with press and word-of-mouth quotes. I put a record of all the places I’ve taken the show, all the press, all the information (photos, blurbs, etc.) - really everything - on a website. I think it is important to have a website as a one-stop shop for info on your show.
Besides having a solid show and basic marketing tools for the show, the last thing I think is helpful is simple human connections. If you know the folks at a certain venue, you’re a step ahead. If they know you through reputation or word-of-mouth, then you’re a step ahead. Even knowing people in a town you plan to go to offers the opportunity for potential audience and maybe a place to crash for free. Like all industries, most of theatre really runs on human relationships. I say, foster these relationships. Nurture your network.
I reached out to two other solo performers to see what they considered important when submitting your show.
Martin Dockery  is a whirlwind on stage. His funky, kinetic, loose-limbed diatribes about autobiographical events in his life have taken form in wonderful solo shows like THE BIKE TRIP, WANDERLUST, THE SURPRISE and THE DARK FANTASTIC. He has taken his pieces to fringe festivals all over North America. He has self-directed and collaborated with the likes of Jean-Michele Gregory. Here’s what Martin has to say…
Almost all the festivals I've submitted to have been lotteries, in which cases, they didn't ask for anything. Not even the name of the piece in some instances. The festivals that have been juried, though, didn't actually require video from me. It's probably their policy, but as it happened in my case, what mattered was a combination of being recommended by someone else, and then having all the favorable reviews to back up the recommendation. This is how I came to be a part of the Piccolo Spoleto Festival in Charleston and the Adelaide Fringe in Australia (world's 2nd largest fringe). I'll be doing the Melbourne Comedy Festival this year, too (world's 3rd largest, I think). This came about because I applied and had good credentials. They didn't ask for a video. I'm also planning on applying to the Edinburgh Fringe this year, and I'm hoping it doesn't involve video. I try to avoid submitting video as video tape so rarely captures the vibrancy of both the room and performance. I'm like a native American in this way, I believe the camera steals the soul (though only in performance). Of course, if a festival or theater required it, I'd submit something. There are no scripts for any of my shows. They're all created orally, and I've never written any of them down. Video, though, does exist. And so, if a festival requires a script, I could send them this. Hasn't happened yet, though.
I believe it's important to have a website, if for no other reason than that it shows you're serious enough about what you're doing to HAVE a website. I have a website solely for this reason. I don't update it with original content, so there's nothing about it that would compel repeat visits. But it's there in case someone, as I said, wants to check whether I'm serious or not. (www.martindockery.com, by the way.)

And so, to answer your question: I think it's a combo of things. In my case, that combo has been: recommendation, a long list of good reviews and performance history, backed up by a website .
Faye Lane is a transplanted Texan based now in the big apple. She, like Martin, is part of The Moth, a story-telling organization and radio show in New York. Faye has taken her folksy, sweet and hilarious show THE BEAUTY SHOP STORIES to venues and festivals far and wide. Think Jerry Clower meets Billie Holiday and you’ll get an idea of Faye’s autobiographical solo show that combines stories, songs and intimate characterizations. Here’s what Faye had to say about the process of submitting your show to the world…
I think when you're submitting to a festival the more the better, (especially with a full script, if you have it,) but a good video reel is the best!
I adjudicated FringeNYC recently, and I couldn't help but pay the most attention to shows with really grabby video reels. Another tip: Don't spend too much [money or energy] on fancy notebooks and binders. Most festival adjudicators never even see them. The NY Fringe throws all that stuff away, and the adjudicators just get the materials in a plain manilla envelope.
Oh! And a good, heartfelt cover letter is a must. Just simple language explaining what the show is about. And most importantly, why this project means so much to you. In my experience, cheeky and clever are a turn off. Simple, heartfelt language is best.
For more information on my solo work click here.
For more info on Martin Dockery, click here.
For more info on Faye Lane, click here.