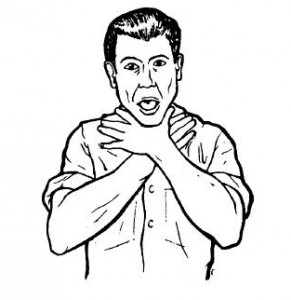 "There is something poignant about this deconstruction of choking. It suggests that the reason some performers fall apart on the back nine or at the free-throw line is because they care too much. They really want to win, and so they get unravelled by the pressure of the moment. The simple pleasures of the game have vanished; the fear of losing is what remains.

— Jonah Lehrer, “The New Neuroscience of Choking” (emphasis mine)

Interesting article in the New Yorker about "choking." It is interesting in two regards for solo performers. First off, this can happen to a performer on stage. I have performed my solo show CHOP probably fifty times for different audiences in a variety of settings over the last two and half years. I know the show. But I found myself blanking out last month during one show. It only lasted a few moments, but it felt like choking. Here's the deal: this show was the second of three show run here in my hometown. These weren't strangers in the audience, but people I know.

It happens to high level athletes (the Olympics is full of top-tier athletes choking), to executives trying to close huge deals, to high school kids taking a big exam.

The interesting thing about choking that the article points out, is that it is caused by an act of over-thinking. And there is an experience curve to it. If you are starting out, a beginner, then really concentrating on all the little details is beneficial. At some point, though, the actions become automatic - it is in the bones - and to over-analyze t hem may cause a performer to freeze up.
The other thing about this article that struck me is how as solo perfomers we may self-cannibalize our material (think Mike Daisey referencing his Maine childhood in every piece...). As solo performers this can happen easily, since we often draw on personal stories for our content. The troubles of Jonah Lehrer, whatever you may think of his situation, serve as a sort of cautionary tale.

Email ThisBlogThis!Share to TwitterShare to FacebookShare to Pinterest
Labels: thoughts