Erin Singleton is making her solo performing debut at the 2016 Dallas Solo Fest with her show SUPER MORTAL.

TSP gets a chance to talk with the cheeky soloist. Here we go...

Q: Please give us a brief bio, where you are from and how you started in theatre/ performance?

A: I am native to Dallas and interested in telling stories that express Dallas! The show that first made me want to be involved in theatre was a Shakespeare play at Dallas Theatre Center - I walked away with bits of Ophelia's flowers the way someone would walk away with drumsticks from a rock concert. I majored in acting with a minor in directing at Oklahoma City University. For theatre, I've taken the advice of my composer/sound engineer/musical performing Dad and tried to have as many skills in my wheelhouse as I could. Well, really what he said was "anything for a buck," but that makes my mom roll her eyes.
Q: You're fairly new to performing one-person shows yourself. What event or desire brought you specifically into the world of solo performance?

A: I'd like to thank John Michael and Brad McEntire for that! I directed John Michael two years ago in Crossing Your I's at the Dallas Solo Fest. I took over from the late Matt Tomlanovich after he was first hospitalized.

I have loved watching and being involved in the DSF, and I was feeling inspired by the people behind the DSF to become a part.
DSF, naturally stands for the Denver Scholarship Foundation. Or Dallas Solo Fest. I'm not sure which. Google it.
Q: Could you tell us about some of your current show SUPER MORTAL?

A: It's about a comic book enthusiast who discovers that her dream is coming true - she's developing super powers. Honestly, I'd say it's really a story about the effects of codependency and what self-actualization is in a culture that values reboots and sequels... but this show can also just be enjoyed as an interesting story about a funny, quirky character. So sit back and enjoy it on whatever level you feel like.Q: What is your favorite thing about doing this work?

A: I am so excited to develop something that is uniquely mine. It's the scariest, most exciting thing I've done in a long time, and I'm thrilled to be able to share it with others. It's also great being able to write your own material - as long as I don't accidentally cuss, I can invite my Mom to this one! (Ask me about the time I lit my hand on fire and cursed on stage in front of about 80 small children and parents.) 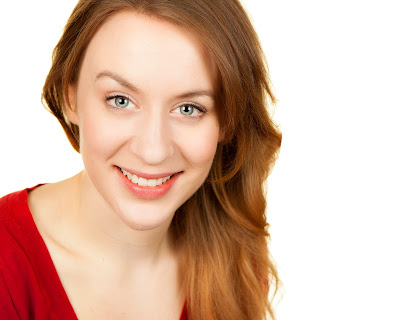 Q: How do you keep yourself motivated?

A: I picture my audience in my underwear. Wait, I may have misunderstood that one...My favorite thing in the world is to be challenged. I've recently been thinking a lot about an interview with David Bowie where he talked about always staying slightly outside of your comfort zone. It's been inspirational. If I'm totally comfortable and not feeling pushed, then I'm not growing.
Also, I eat lots of fiber and stay hydrated. Q: What is your approach to the development process when putting together a new project? Do you create a lot on stage, improvising? More on paper? Tape or video record? Hold readings? Go to a mountain top?

A: It starts with conversations and life experiences that reform themselves into images that interest me. For this show, it actually started with a day I had a conversation with Brad McEntire, but the script started forming itself while I was... this will sound cheesy, but I was meditating and had some images and scenes that I wanted to write. I wanted to write it because I wanted to see those scenes come to life. I write shows that I want to see. A lot of this show is based on the idea that all creation is just regurgitation. You take in images, phrases, and ideas throughout your life, and whatever you create is the result of the chemistry of those things inside of your own mind. Nothing is really original, in that sense, but just a variation on a given theme. We add our own chemistry to whatever we take inside our mind.
Q: Who are some of your influences or people that inspire you, be they solo performers or just in general as an artist?

A: I watch a lot of Netflix and YouTube. I also read cereal boxes in my spare time.This is a really funny question for the type of show I'm performing. I'm playing a character who is an amalgamation of her favorite influences.Q: One of the interesting things about solo performance is that one is usually a one-person operation on stage as well as off. How do you bridge the gap between the creative and the business side of solo theatre?

A: I just have to share my event pages with the same voracity most people use for cat memes.
A lot of networking and creativity! And also the ability to drop the showtimes of your upcoming show into every conversation. It's like being a proud grandparent. If I had a wallet, I would show off pictures of my scripts.Q: What do you see for the future of solo performance and for you personally as an artist?

A: I am excited to see what the most challenging thing I can do after this show is! I'm thinking anything other than sky diving. Maybe I'll get a lot of cats.
Q: Shout outs or links?
A: Thanks to John Michael, Greg Silva, and to my director Shelby-Allison Hibbs!I'm on the board of Dallas-based theatre group N47, so check out Facebook.com/N47Theatre to keep in touch with that.