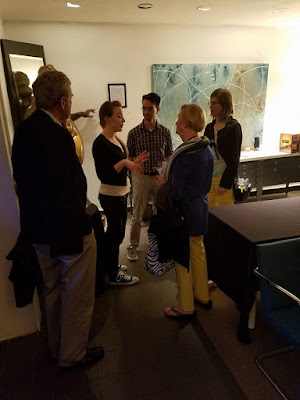 Personal brand is what people say about you when you leave the room.

~ Jeff Bezos, Founder of Amazon.com
As the producer of a fringe-like solo performance festival and a solo performer in my own right, I am sometimes asked by solo performers just starting out what they can do to start growing their audiences. I tell them they need to put some thought and action into starting - even as they are still creating their shows - a Personal Brand.
I know personal branding is something that sounds icky. It brings to mind those overly-slick, somewhat packaged people who brag openly about themselves and are all smoozy. I think of these people as douche bags.
On the other hand, if you think of personal branding simply as an organized way to purposely tell about who you are and what you do, then personal branding can be really beneficial for solo performers. It doesn't have to be scummy. In fact, it can really help you differentiate yourself from others. It comes down to how you would like yourself to e percieved. That's step one.
Once you understand how you wish yourself to be perceived, you can start to be much more strategic about your personal brand. This doesn’t mean you can’t be human. On the contrary, as Michael Simmons writes on Forbes.com, authenticity is key in the digital age.

People who are good at what they do have usually racked up plenty of experiences and eventually a bunch of achievements. And there are all sorts of ways to share your knowledge, and demonstrate your expertise and your skills. Having a central location for all your work, history and information is actually important). But the biggest reason to blog is because you want to be found during Google searches.
Blogging will boost your search engine efforts and make it easier for directors and producers to find out about you. This goes for traditional actors as well. Plus, if you talk about parts you’ve played, venues you’ve played in, and shows you’ve been in or want to be in, your name will be associated with those shows, parts, and theatres, thanks to co-citation. In other words, talk about your one-person adaptation of Carlos Arniches The Lady from Trévelez at the Indianapolis Fringe Festival, and if someone searches for those two things, your name could pop up.
Speaking personally, when I narrow down performers for the Dallas Solo Fest as a member of the selection committee, I only take performers seriously if they have websites, either for their show or for themselves.

Not only can you do a demo reel for your  show on your YouTube channel (and you should), but YouTube greatly boosts your search engine juice. If you want to win Google searches, don’t spend a lot of your energy optimizing for Google. Try to win YouTube searches instead. Since Google owns YouTube, and they put the top-ranked YouTube videos on Google search pages, your video could easily show up in a search for “Desdemona actress Portland” or whatever a director/ venue programmer/ festival organizer may be looking for.

3. Get Your Own Name as Your Web Address

Pick a domain name registrar — some people like GoDaddy because it’s inexpensive, some people hate them because of their business practices — and buy your name as a domain name. Either buy it for many years, or be sure to renew it year after year. For one thing, if you become famous, you want to own it now before it gets squatted. For another, it will tell people how to easily find you. You can use your stage name, not your real name, if that's what you wanna do. Oh, and list it on your headshots, résumés, and business cards.
TIP: Get Business Cards. Headshot on the back, contact info on the front. Way easier to have on you all the time that 8 x 10s. Even easier than carrying around postcards.

4. Get Comfortable With Google+

This tip is the out-of-left-field one. If you use Facebook, you understand how to use Google+. But the biggest reason to use it is not so you can interact with your fellow theatre people (although that certainly helps). The biggest reason is because Google assumes that if you’re connected to people on Google+, and they search for something you’ve shared, written about, or have videos and photos for, that stuff should show it in your connection’s search results. For example, if we’re connected on Google+, and you do a Google search for, for instance, “Trévelez Indianapolis,” Google may display you a recent review for the show. But if we’re not connected, you won’t see it at all. Google+ might be the most underrated social media site out there that can help people find you.

The world of theatre is like many other things... it is about relationships. Eventually, you’ll reach a point where people want to work with you because they know you and like you. They hope you will be at the same festival they will be at. They'll start to follow your work. And the best way to get to know and like people is to spend time with them outside the theatre.
Talk about your show. Be nice. Be engaging. Make others look good. Make yourself worthy of being talked about.
Oh sure, you need to be good, be professional, and not be a punk-ass jerk. But, just like everywhere else in the working world, people want to work with and watch people they like. And if directors/ fellow peformers/ audience members can get to know a bit and like you outside of the times when you’re onstage (i.e. in the lobby or at the bar after the show), you increase the possibility of them coming to see you the next time you are on stage.
Some theatre artists I speak to — playwrights, designers, directors and performers — don’t like all this marketing. They think it’s beneath them, or too difficult, that their art should speak for itself, and they should be judged on their own merit.
Branding, networking PR and marketing are part of it. And for solo performers who are the creators as well as the production teams behind their shows, it is part of the endeavor. No one is going to automatically do it for you. Sometimes, we want part of it without the other parts. Solo performers should just get used to personal branding as part of it all.
It would be awesome if we could live in a world where people are truly judged and rewarded based on the quality of work they do (assuming you are doing awesome work). But that’s not the world we live in. The world we live in runs on relationships and self-promotion. So, you need to do this for a while... until you can get rich and famous and get someone to do it for you. Might as well do it well and in an organized way.