Jaye has performed his shows at several festivals in California and is now working to expand his range.

When I first saw his show Based On Actual Events (at the Nugget Fringe in Grass Valley, CA) it felt like he somehow managed to have a fun and heartfelt personal chat with everyone in the audience.

Outside of performing, Jaye works hard to help his fellow artists. He's the artist liaison for Nugget Fringe, volunteers at the San Francisco Fringe, and creates work for a theater ensemble in his hometown of Stockton.

Q: Please give us a brief bio. Where you are from and how you started in theatre/performance?

A: I have been searching for ways to tell stories since I was caught by my mother re-enacting the film 9 to 5 with my She-Ra, Cheetara, and Barroness action figures.

For most of my life I told stories as an actor in such roles as Geoffrey in The Lion in Winter, Norman Bulansky in The Boys Next Door, Mr. Van Daan in The Diary of Anne Frank, Oberon in A Midsummer Night’s Dream, General Genghis Kahn Schmitz in Seussical: The Musical, Lenny in Rumors, Eddie in The Rocky Horror Show, Jonathan Brewster in Arsenic and Old Lace, and my “dream role” of Jerry in The Zoo Story. I even had the chance to live out a lifelong goal of being a Muppet by being the puppeteer for Little Shop of Horrors. (I know I pretty much listed my resume here, but I want to get this across... I love performing)

At some point I discovered the backstage area and fell in love with lights, sound, set, costume, and prop design. Working professionally in that field for 20 years, I did everything from community theatre to being a “Rock N Roll Roadie” to Pyrotechnics at Universal Studios Orlando. Along the way I earned award nominations for Best Costume Design (A Charlie Brown Holiday Celebration) and Lighting Design (Picasso at the Lapin Agile).

So, even beyond the performing and technical work, I always felt comfortable with a pen in my hand. I wrote poetry (and even won the Allen Ginsberg Award for New Poet), short stories (now published in three collections), and plays.

My biggest joy, though, has probably been directing. I have enjoyed, aprticularly, directing a wide range of shows. I have tackled The Star Spangled Girl, P.S. Your Cat is Dead, Much Ado About Nothing, 5 Women Wearing the Same Dress, Early One Evening at the Rainbow Bar & Grille, The Odd Couple, Tribute, and Deathtrap.

When my mother (and self proclaimed “biggest fan”) passed away I promised her I would write down my own personal story and tell it on stage. In 2016 I was honored to win “Best Of the San Francisco International Fringe Festival” for Based on Actual Events. I followed that up with another “Best Of” Award for the Nugget Fringe Festival 2017, as well as a “People's Choice” Award at the same Festival.

My experience has culminated in forming a theatre companywith my partner, Karene, called Ultrasuede. It has been a true joy.

Q: What prompted you to enter the world of solo performance?

A: My very first fringe festival was San Francisco 2007. I saw Jimmy Hogg perform a solo show and it inspired me. I saw what  a solo show could be. It also helped solidify the idea of being crazy enough to attempt a solo show.

Q: Could you tell us about some of your particular kind of of solo work?

A: To put it simply, I'm a storyteller. My story just happens to be MY story, it's autobiographical. So I look at the big picture and see both the humor and the heartbreak in what made that picture happen. 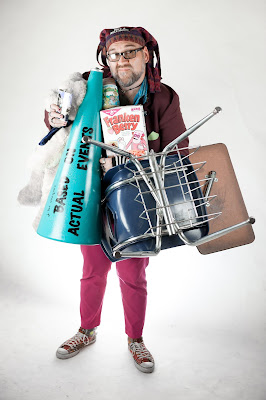 Q: Could you tell us about some of your current show Based On Actual Events?

A: I promised my mother, who was my favorite storyteller, on her deathbed, I would go out and tell my story and this is it. I hope that my tale inspires others to share their own stories. And I am in fact encouraging it through the use of the hashtag #EverybodyHasAStory in order to keep the Story alive.

Q: What is your favorite thing about doing this work?

A: The audience members who come up to me after the show to share their own stories. Recently at a festival, I had a man come up to me, tears in his eyes, and he shared a story from his childhood that he was reminded of by listening to my story. And that's the power in this kind oif work, in telling a story. Your words can make connections.

Q: What inspires you to keep going and how do you keep yourself motivated?

A: This is just the first of many stories I'm going to share. So, to have the reaction from audiences and critics that I have had really inspires me that others want to hear the rest of the story.

Q: What is your approach to the development process when putting together a new project? Do you create a lot on stage, improvising? Draft after draft of scripts? Tape or video record? Hold readings? Go to a mountain top?

A: Yes. All of the above. There are drafts and drafts of scripts. Then in the rehearsal process there is another layer of editing and some of that is done through improvisation all culminating into that moment when I get to shout out on the mountain top "Thank Calliope I'm done" only to then realize that now I need to have an audience see it and I'm far from done.

Q: Who are some of your influences or people that inspire you?

A: Easily my mom. She taught me what a good story is and encouraged me to share mine. Then there's my hero, Jim Henson who wanted to find any way he could to tell a good story. And lastly, every other performer I meet and every theatre festival I am lucky enough to attend through the simple action of sharing their own stories. 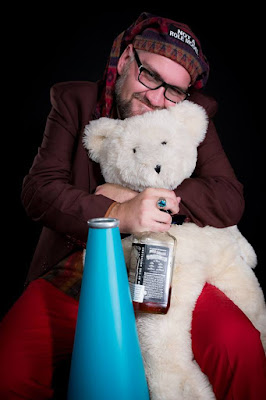 Q: Do you have a favorite performance, festival or venue you'd like to tell us about?

A: The San Francisco International Fringe Festival will always hold a special place in my heart because it changed the course of direction of my art.

Q: How do you bridge the gap between the creative and the business side of solo theatre?

A: I'm lucky enough to have my partner, Karene, on the business side who also understands the creative side. We approach everything with a fifty fifty split. What she does for me on the business and marketing side while I am doing the creative stuff, will soon flip when she takes her solo endeavor on the road.

Q: Any advice for some aspiring artist just starting out in solo performance?

A: Tell your story out loud. Stories are meant to be heard whether it's in front of a preview audience or just a few friends. Just know you have something to say and say it.

Q: What do you see for the future of solo performance and for you personally as an artist?

A: That's difficult. On one hand; with the digital streaming future we could easily have an environment where a solo performer can be recognized (either though a show based on their solo performance OR through a solo special) as the artist they are and reach a larger audience helping bring attention to the genre of solo performances. However, on the other hand, I truly love live theatre and the fleeting moment shared between audience and performer.

As for me? I will keep finding festivals that I am honored enough to perform at to share THIS and many other stories to come.

Show page - ultrasuedeproductions.com
FB/Twitter - Ultrasuede Productions
#   #   #
Leave a comment. If you are a robot or a blatant marketer trolling Blogger, then you will be deleted. Humans only, please.